We all might be aware that the world population count has increased to more than 7 billion. Well, this is a major issue we all must be concerned about. So World Population Day is celebrated every year on 11 July to seek some attention on the problem of alarming population count.

Today, Mother Earth is getting sick with many diseases like pollution, depletion of natural resources, climate change crisis, etc. These are all major problems that we must try to resolve.

However, our biggest challenge remains the exponentially rising world population. Our planet has seen such a popular explosion that it has rapidly become over the biggest crisis over the last 150 years. Rapid rise in population is one of the major reasons for many problems that the planet earth is going through.

The day was declared on 11 July 1989. It was suggested by Dr. Zacharia. When the population of the world crossed 5 billion on 11th July 1987 this decision was taken to mark this day to make aware people about many things like family planning, human rights, right to health, gender equality, child marriage, use of contraceptives, sex education, knowledge about the sexually transmitted diseases, etc.

Why is overpopulation a crisis?

Overpopulation has been a major problem for many decades. We have limited resources as well as limited space. But it seems that the planet is insufficient to fulfill the needs and desires of human species.

There have been many changes in birth rates and population trajectories of countries and continents in recent years. More than 80 million in a year population is increasing day by day.

It has chances to increase more if we are not taking serious action. The current population of the world is 7,798,858,597 which is more than 7 billion.

Overpopulation very quickly leads to the depletion of natural resources in the world. Some of these resources like fossil fuels are non – renewable.

Further human species is overusing natural resources that they are very less available to other species. In the race of fulfilling never-ending desires, the whole ecosystem is disturbed.

On the other hand, World Population Day teaches and awaken the general public about sustainable development.

Not only the depletion of natural resources, the harm by pollution and overuse ,mankind has done to the environment has made earth suffer from global warming and climate change.

Many factors affect population growth. More than half of the people are added to the world’s population over the rest of the century. This is the reflection of four main factors.

It is falling family size which remains high in most of the countries.

In many countries, early marriages lead to more birth rates as well as females are forced to give birth to more children over their fertile life.

There has been a decrease in the death rate due to advancement in medical sciences.

If we are broadly speaking about the total fertility rate, it is the rate that tells about the number of children a woman is likely to have in her lifetime.

Birth rate indicates the number of babies born per thousand population. When there are large numbers of birth rates in a population it is pushed up. There has been a fall in death rates worldwide.

The population is also affected by death rates and the proportion of people of childbearing age. Thus increase in birth rate and fall in death rate has led to population crisis all over the planet.

The day is celebrated to empower youth and make them understand about friendly techniques to avoid unwanted pregnancies at a young age.

Ensuring access to primary sex education for both girls and boys.

Aware people about sexual infections and how they can take sexual protection.

Ensure penetration to reproductive health care services. Introduce laws which is beneficial for girls. Make aware of the proper age of marriage for both boys and girls and implementing laws for the same.

Actions to take to stop Overpopulation on a National level

This day is an effective way for us to lessen the threat we face from the population explosion. It ensures that our future generation can also enjoy the same privilege and resources we can enjoy at the moment.

Empowering women by giving equal rights. Making them aware of treatments, and opportunities.

People must be made aware of information about health care and people should be provided with all types of low cost safe, effective contraception to make sure it is infection-free for both men and women and at least cover under all health care plans.

Masses should be made aware of proper family planning. The government must imply strict rules regarding the number of children per family.

Unified family planning and safe motherhood programs into primary health care systems create around a population size and work to achieve it.

So, by these, we can control overpopulation.

We all must step ahead and work together to control this overpopulation to save our mother earth. 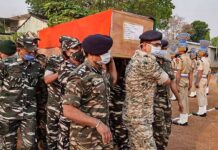 Tree Plantation on Human Ashes: A Bold Step in the Direction...

Hatred Stirs Up Conflict But Love Covers Over All Wrong –...