Home Entertainment Fukrey Returns: Be Ready To Laugh But Only If You Can Handle...

Fukrey Returns is mainly saved by Vipul Vig’s dialogues and actors. If you are not aware of its first part then tough to understand the story. The actors are (more or less) the same.

This movie have four college-bound buddies get mixed up with Richa Chadha, a local underworld operator, and beat her through sheer dumb luck. In this one, she’s just out of prison, owes her political patron big and is bearing down on the four youngsters for payback. But ultimately this movie turned out to be a mainstream comedy which goes pointless in the end especially with its story.

The previous one was pretty much an experimental comedy but it was engaging and something different, this one just has a bit more of tragic comedy. A lot of overacting is done whereas some characters fade away, in the end Varun Sharma comes out as the highlight. All the comedy in the movie comes with him and Bholi too. Pankaj Tripathi as Panditji with English one liner is totally surprised package of the movie.

The dance numbers seem pretty good to me. Music is also good, ‘Mehbooba’ is foot tapping while ‘Tu Mera Bhai Nahi Hai’ is relegated to the background. ‘Ishq De Fanniyar’ is missing from the film and ‘Peh Gaya Khalara’ is played in the end credits.

Manohar Verma’s action seems real. Andre Menezes’s cinematography is clean. Dev Rao Jadhav’s editing is okay. The VFX is excellent. First half was more entertaining than second half. It’s not bad if you like to laugh and let loose but it does get boring and over dramatic in the second half especially. All Fukrey fans be ready to laugh again with Choocha’s jokes but only if you can handle the story. 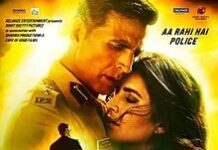