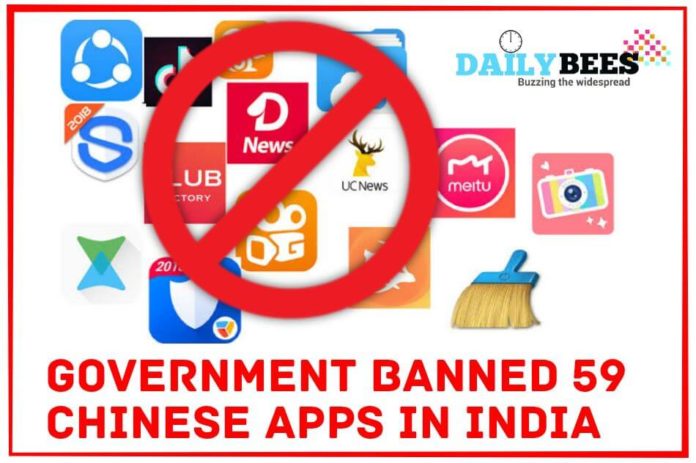 We have seen the government taking major decisions many times! This time again, the government has come up with a big decision of banning Chinese app in India. Well! Let’s know about this in detail! A total of 59 Chinese app in India are banned by the government. The Chinese apps banned list includes apps like

Why are Chinese apps banned in India?

The statement by Electronics and Information Technology Minister of India is as:

Also, there are data privacy issues, as a result of which the government has taken this major step to ban Chinese apps in India.

Some of the Chinese apps banned in India are used by many people and banning them will impact the country of origin at a mass level. People are calling it a Digital Air Strike! Isn’t it? In backdrop of current stand-off in Ladakh with the Chinese troops, the government has announced Chinese app banned in India. What is going to happen next about Chinese app in India?

Though the government has banned 59 Chinese apps in India, it will take some time to see the effects on downloading apps like playstore and to already downloaded Chinese apps which are banned. These apps will be deactivated and won’t work in coming days! This move was very much demanded by the citizens as people were trending tags relating to it in previous days, specially after the sad news of martyrdom of our soldiers during face-off with Chinese troops. So, what people are saying is a must to know topic!

The reaction of people after Chinese apps ban in India

The social media is flooded with the praise of government and also with demand of ban of more apps with china’s investment. So many hashtags are trending on Twitter related to this news, almost every tag you will see is relating to Chinese app ban in India. People are posting memes as well with praising the government on this big move! This is another way to fight for the security of the nation and this was a much needed demand for sometime now! So, what do you think on this Chinese app ban in India?

Father’s Day: The Power of A Dad in Child’s Life is...

Your Personal Guide To A Healthy Skin This Summer!