Whenever we get to know anything about our favorite actor or actress we all get so excited to know more and more about them. We all know very well who is Aishwarya Rai Bachchan, even her daughter Aradhya Bachchan, but if someone ask who is Bhagat Singh, Sukhdev Thapar or Shivaram Rajguru, then I don’t know how many of you will be aware of them. What they did can’t be forgotten. Let’s understand it in an empathetic way.

Suppose, some guest comes to your home and then after few days they start taking it for granted to stay at your home, to use your things & eventually your whole life starts moving around it. You are unable to do anything against them, because they are more powerful than you. Now they are torturing you, giving you various hardships, treating you as servant in your own home, your freedom is lost completely! Now what I have written above feel it on yourself, this is actually the horrible thing which happened with all the Indians hundreds of years back, when India was suffering at the hands of British rule & these freedom fighters dared to fight the war for our freedom.

Why  I am writing this today? Because today is 23rd March, the Martyrs Day also known as Sarvodaya day or Shaheed Diwas, the death anniversary of three great Indian freedom fighters Bhagat Singh, Sukhdev Thapar, and Shivaram Rajguru to remember their sacrifices & to pay a sincere homage to them for their courage & outstanding spirit. Tributes to even their mothers who gave birth to such brave heart sons, who sacrifice their life for the nation at a very young age & became an inspiration that will remain a real symbol of heroism forever. The name itself is synonymous with bravery, courage, & sacrifice. A well-known freedom fighter among youth was born on 27 or 28th September 1907 in Punjab in British India. Along with other revolutionaries, Bhagat Singh founded the Hindustan Socialist Republican Association. It wouldn’t suffice to say that he was only a freedom fighter, who contributed immensely to the Indian freedom struggle, but he was much more than that by not only managing to put his point forth to the British government, but also managed to scare them with his indomitable spirit and undying grit. By embracing the death at a very young age he became the epitome of courage & sacrifice, thereby residing forever in the hearts of every Indian. Like Bhagat Singh, Sukhdev Thapar was also an Indian revolutionary born in Ludhiana, Punjab British India in Khatri caste. And also the member of Hindustan socialist Republican Association(HSRA). He also established the Naujawan Bharat Sabha Organisation which helped the young participate in the freedom struggle and fight communalism. SUKHDEV was also an accomplice of Bhagat Singh during the central Assembly hall bombings. A well-known revolutionary from Pune, Maharashtra who was accused in assassination of JP saundas along with Sukhdev and Bhagat Singh. He also went to be a member of HRSA as well. Since his childhood days, he only witnessed the brutal atrocities on India & its people. This instilled within him a strong Urge to join hands with the revolutionaries in a bid for India’s freedom struggle.

All three of them gave their heart and soul to win independence for the motherland. Value the blood that these fighters have shed in the service of their motherland. By celebrating this day, we must show our respect towards who attained martyrdom to Earn the Freedom for us. They faced so many hardships but they did not flee away from any torture, they embraced the death happily so that the country can be free. The day when we cease to respect the Martyrs, we will cease to respect the nation. 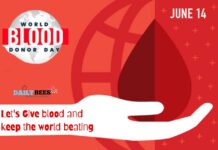 33% Reservation for Girls in Bihar medical and Engineering colleges

World Environment Day 2021: Theme, purpose, how to celebrate this day