Home General Baisakhi: History and significance of the harvest festival

Vaisakhi means the festival of Vaishakh month.
On this day, bathing in the Ganges river is of great importance. On this special day, a huge fair is held in Haridwar and Rishikesh. This festival is also called the equatorial solstice. Baisakhi is traditionally celebrated on 13 or 14 April every year in Punjab. This festival is very important for Hindus, Buddhists and Sikh people. On the first day of Vaishakh, many New Year festivals like Jud Sheetal, Pohela Bosakh, Bohag Bihu, Vishu, Puthandu are celebrated in many regions of the entire Indian subcontinent.

1. Main act of the day of Baisakhi
2. History of Baisakhi
3. Significance of Baisakhi festival
4. Baisakhi: Harvest festival
5. Beginning of New year for Sikhs

Main act of the day of Baisakhi

It is a law of nature that whenever there is a culmination of any oppression, injustice, tyranny, then there is also birth of reason to solve it or its remedy.

So, when the Mughal ruler Aurangzeb crossed every limit of oppression, injustice and atrocities, Shri Guru Tegh Bahadurji was martyred at Chandni Chowk in Delhi, only then Guru Gobind Singh Ji established the Khalsa Panth with aim to be ready for the neki (goodness).

People who had become weak, who had been affected by old customs, had become cowardly due to centuries of political and mental slavery. Guruji bestowed his blessings over the people who were considered to be of low caste, whom the society considered despised, and made them lion by making them drink the holy nectar. Thus, on April 13, 1699, the tenth Guru Gobind Singh Ji ended the tyranny by establishing the Khalsa Panth at Shri Kesgarh Sahib, Anandpur.
He decorated people of all castes who tasted the nectar with the same nectar pot (bate).

The Baisakhi festival has its origin in the Punjab province of India and is celebrated as the success of the beginning of the harvesting of the Rabi crop.

Apart from Punjab and Haryana, the festival of Baisakhi is also of great importance in North India. Harvesting of wheat, oilseeds, sugarcane etc. begins on this day.

Vaisakhi is the harvest festival for the people of Punjab. In Punjab, Vaisakhi marks the ripening of the Rabi crop. This day is celebrated by the farmers as a thanksgiving day, the farmers thank God for the abundant harvest and also pray for future prosperity.

Vaisakhi has traditionally been the Sikh New Year.

The creation of the Khalsa calendar begins on the day of Khalsa-1 Vaisakh 1756 Vikrami (30 March 1699). It is celebrated all over the Punjab region.

Sikh communities organize processions called nagar kirtan (literally “city hymn singing”). It is headed by five Khalsa, who are dressed as Panj Pyare and take out processions on the streets. 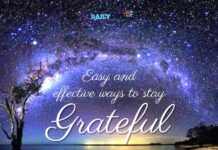 EASY AND EFFECTIVE WAY TO DO MAKEUP IN SUMMERS

Finding happiness:-5 things to do for a Cheerful Life