Home General World No Tobacco Day 2021: Quit Tobacco To Be A Winner

Tobacco consumption is really a big problem nowadays, maximum percentage of the people of the country consume tobacco and tobacco products. It impacts directly on lungs and heart which cause disease and also leads to mental disorder, which further leads to the youth at risk.

Towards a tobacco-free world, the World Health Organization (WHO) created the World No Tobacco Day in 1987 to show its effects and causes. Tobacco use is a health hazard, which creates severe negative health impacts including minor to major health diseases. Let’s checkout in details about anti tobacco day. The World No Tobacco Day, 2021 theme and its purpose

Every year on 31st May, World Health Organization (WHO), created the World No Tobacco Day to draw the attention to the masses at large about some serious concern regarding tobacco consumption is the purpose of Anti Tobacco Day, so that the people who unnecessarily lost their lives can be prevented from tobacco based diseases.

Theme of the World No Tobacco Day for 2021 is “Quit tobacco to be a winner”. The main focus of this year theme is to spread awareness among the people to commit to quit the tobacco by their own will.

World Health Organization aims to aware the people about the danger of tobacco and tobacco related ailments because it has nicotine in it which caused numerous serious threat to human health.

Tobacco use is risk factor to the people at large. In NCDs, mainly cardiovascular diseases, Cancers, Chronic respiratory disease and diabetes are leading cause of premature deaths, 6 million people die from tobacco use each year both from direct tobacco use and second hand smoke, which is ultimate burden to the nation.

Death numbers due to tobacco use and health impacts

World Health Organization shows 8 millions deaths due to tobacco use which is a serious threat to human health.

In India, more than 1 million people every year die due to tobacco use, accounting for 9.5% of all deaths.

Tobacco use is a health hazard, according to the Global Adults Tobacco Survey (GATS) for India 2016-2017, 28.6% all adults do smoking and use tobacco products.

India and The Framework Convention On Tobacco Control

After China, India is the second largest tobacco consumption country in the world. According to socioeconomic status of India, poor people tend to be bidi smokers, even women in villages also use tobacco directly and indirectly tobacco products because tobacco has low cost and it is in people’s reach.

To solve tobacco related problems, 181 countries ratified the World Health Organization- the Framework Convention on Tobacco Control (WHO-FCTC), India in 2004 ratified the FCTC, which was the first ever international public health treaty of tobacco control.

There are steps proposed by the Framework Convention on Tobacco Control (FCTC) to solve tobacco problems:

Why people use tobacco and tobacco products

When people are used to smoking, they have a addiction of nicotine, which is the main product present in the cigarettes and bidis and other tobacco products. When they do not get nicotine, it causes the brain to release adrenaline hormone and creates a sensation in mind to have it. That sensation results in mood swings and when people do not smoke , they show withdrawal symptoms which leads to addiction.

How to overcome tobacco and tobacco products

Tobacco cravings leads to more consumption of tobacco and tobacco products. By following some steps one overcome the use of tobacco habit.

Health exercises and yoga can give you a boost to your mind which can heal your bad habits.

Meditation: A powerful weapon to all problems is meditation, which have energy to apart you from any kind of misery and pain. Regularly doing meditation helps you and motivates you towards positivity.

Have a good plan of the day so that you engage in it and be busy towards your work so that no negativity can not surround you.

In Covid-19 era, people should stay away from the tobacco products as its smoke have 2.5 particulate matter which is a health h
hazard to masses.

If India really wants to be a good health index country then India and its people have to take some strict action related to health policy. People have to be cautious about their bad habits and it’s a need to change attitude towards rising health diseases because of tobacco consumption. 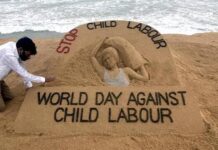 World Day Against Child labour 2021: Why is it observed and how can we stop this menace?

Best Places to Visit in Udaipur in this Winter – A...